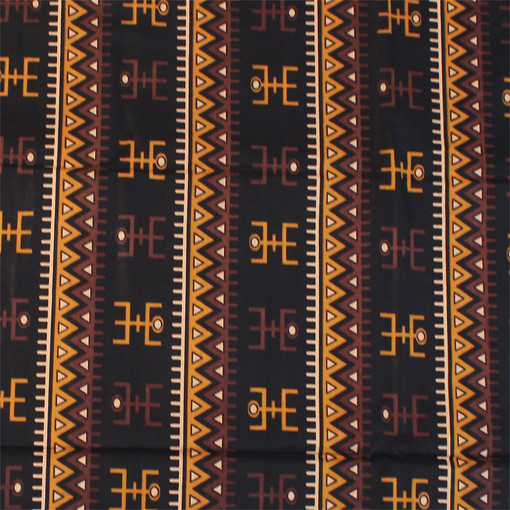 Add a touch of spirituality and mystery to your next project with this Dogon African Print Fabric 6 Yds. The Dogon are a people group living in the Bandiagara Escarpment, a sandstone cliff of up to 1,600 ft high in Mali. They escaped there centuries ago to avoid religious persecution and enslavement. Many believe they possess ancient wisdom about the universe itself, but they don’t share most of their beliefs with outsiders.

The mysterious symbol on this fabric, called Kanaga, has a secret meaning the Dogon don’t share with others. During dancing ceremonies, the Dogon wear Kanaga masks to create a bridge to the supernatural world that allows the dead to cross over in peace. This fabric contains rows of this symbol alternating between two colors. There are borders of triangles between each row. If you want to honor African spirituality and perseverance, this fabric is for you. Available in 3 styles. T-4352