How to Cook Red-Red Stew from Ghana, Africa 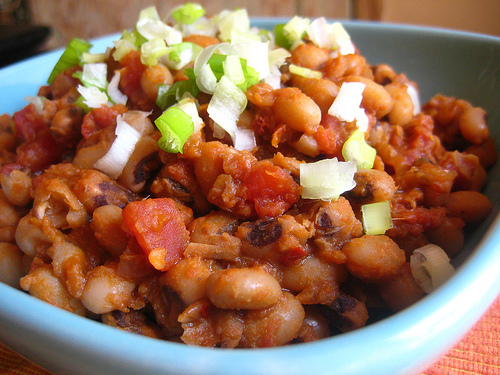 Red-Red is a popular dish from Ghana made from cowpeas (black-eyed peas). It is thought to have been named for the combination of red pepper and red palm oil that is used in the cooking process. The Red-Red cowpeas stew is usually served with fried plantains, and is a lunch favorite in Ghana, particularly among office workers. If you are "unbeanz," (i.e. unemployed) you can survive on this meal easily because the ingredients are inexpensive This is most commonly served with fried ripe plantain (popularly known as "koko"). It is an ideal choice for vegetarians and vegans.

Clean the black-eyed peas in water in a large pot. Soak them in water for at least an hour or overnight. After soaking them, rub them together between your hands to remove the skins. Rinse to wash away the skins and any other debris. Drain them in a colander If you are using smoked or dried fish: remove the bones and skin, rinse and soak them in water, then dry them. If you are using dried shrimp: grind the shrimp (or obtain already ground or powdered shrimp).

Step #2
Place the black-eyed peas in a large pot, fill the pot with enough water to just cover the peas. Bring to a slow boil; reduce the heat, cover, and simmer until the peas are tender; thirty minutes to an hour. When cooked, the peas should be moist, but not standing in water.

Step #3
While the peas are cooking: Heat the oil in a skillet. Fry the onions until slightly browned, then add the tomatoes, and fish and dried shrimp (if desired). Mash and stir the mixture to form a sauce.

Step #4
Stir the onion-tomato mixture into the black-eyed peas. Add bouillon cubes (if you are not using fish or shrimp). Simmer for ten minutes. Add salt, black pepper, and cayenne or red pepper to taste.

Step #5
While peas and sauce is simmering: Prepare fried plantains.

Step #6
Serve peas and plantains side by side on a plate.

How to Prepare Fried Plantains:

Step #2
Fill a skillet with 1 inch of Canola or vegetable oil. Preheat the skillet until hot, but not smoking.

Step #3
Fry the plantains until they a nice golden brown color, and then flip to the other side. This should take about 2 or 3 minutes in total, but let your eyes be the judge.

Step #4
Remove the plantains from the skillet and place on paper towels to drain the excess oil, then season with salt and pepper. Makes about 6 to 8 servings.

How to Prepare Boiled Plantains:

Drop unpeeled plantains in boiling water. Cook for 15-20 minutes until a test plantain is tender when pierced with a fork. Peel before serving.

Note: Because of the amount of agricultural chemicals used in fruit cultivation, we suggest a good soap and hot-water scrub before boiling plantains. If you prefer, you may peel them before boiling

A History of the Cowpea:

The cowpea is indigenous to Africa and contributes immensely to the diets of the under-privileged. It used to be called the "poor man's meat". However, improvement in the storage and processing techniques of cowpeas has changed this perception. Cowpeas are now accepted, as food in the homes of the rich, the informed, the salaried worker and all those who can afford it. The cowpea is rich in protein and B-vitamins.