Nearly 15 years have passed since the genocide in Rwanda of 1994. Along with the Jewish Holocaust, it is one of the worst atrocities of the last century. In only 100 days about 1,174,000 people were killed. This amounts to 10,000 people murdered every day, 400 every hour, 7 every minute. Thousands of widows, many of whom were submitted to rape, are now HIV positive. There are about 400,000 orphans that were left after the genocide.

Why did this all happen? On April 6th 1994 the plane carrying Rwanda's president was shot down. The Tutsis people group were accused of killing the president, Juvenal Habyarimana. Because of this, the Hutu civilians were told by radio and word of mouth that it was their duty to wipe out the Tutsis. First, though, anyone from the Hutu people group who was against the genocide should be killed. So should Tutsi wives or husbands. After this the Tutsis were attacked, rounded up and slaughtered.

Now makeshift courts are trying thousands of suspected killers for the crimes of 1994, and the new president, Paul Kagame is pushing an ambitious reform agenda. Signs of development are everywhere. But even as Rwanda moves on, we don't want to forget what they've been through. So take a few minutes today to remember the victims of the genocide, and think of the survivors there. Say a prayer, donate to a Rwandan charity, or take a moment to tell your children about the importance of respect for different people and their cultures. Survivors Fund is a charity organization dedicated entirely to supporting survivors of the Rwandan genocide. Click Here to see their web site. 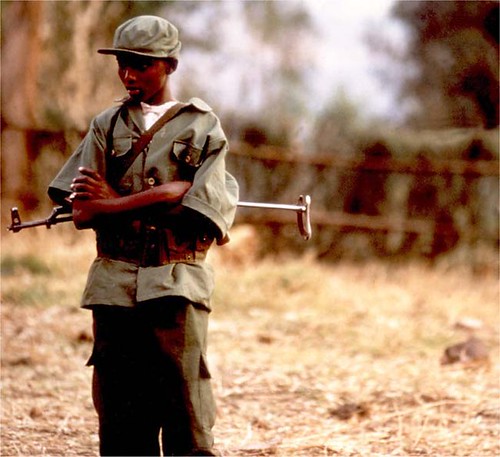 Above is a photo of a child soldier in Rwanda. Many charities will also help with the rehabilitation of child soldiers. You can order a Rwandan flag in commemoration of this day, Click Here. To find more free articles about African culture just visit the Africa Imports web site or Click Here.