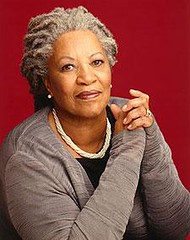 Yesterday, on February 18th, 1931, writer Toni Morrison was born. She was the first African American woman to receive a Nobel Prize for Literature in 1993. Born Chloe Anthony Wofford, she displayed an early interest in literature. She studied humanities at Howard and Cornell Universities, followed by an academic career at Texas Southern University, Howard University, Yale, and since 1989, a chair at Princeton University. She has also worked as an editor for Random House, a critic, and given numerous public lectures, specializing in African-American literature. She wrote critically acclaimed books such as The Bluest Eye, Sula, Song of Solomon, and Beloved which won the 1988 Pulitzer Prize for fiction. She had a great talent for expressing the Black experience and putting into words what many people went through and are still going through. Morrison developed a strong following among both readers and critics whom fell for her lyrical style, sharp observations, and lush storytelling. Morrison became a professor at Princeton University in 1989 and continued to produce great works. In recognition of her contributions to her field, she received the 1993 Nobel Prize in Literature, making her the first African American to be selected for the award. Would you like to see more Free Articles? Just go to the Africa Imports web site or Click Here to go to the articles directly.