Zimbabwe celebrates her independence on Saturday. There are many mixed feelings of both blessing and despair that Zimbabweans face when they approach their Independence Day.

Zimbabwe won independence from Colonial Rule in 1980. Thousands fought for freedom from colonial rule; and with that freedom came much hope for change in Zimbabwe. A guerrilla war lasted from 1965 to 1980; and everyone was ready for social justice. With the election of Robert Mugabe, it seemed that hope had finally been restored. However, a presidency that started out promising turned ugly in 1998, when Mugabe became threatened by the popularity of the Movement for Democratic Change (MDC). He began to use the country's treasury for himself and rewarded friends and relatives with positions of power. He also publicly threatened anyone who chose to organize against his rule. The country is suffering a momentous economic crisis, there are thousands of people imprisoned because they are suspected of going against President Mugabe. He has also promoted drug trafficking to add more money to his dwindling bank account.

In 2008 there was hope that President Mugabe would not be re-elected, but he was voted in by a landslide. The reason? Exit polls revealed that the prime factors in motivating voters were a fear of being murdered and the lack of opposition candidates on the ballot. People were being threatened at the polls to vote for President Mugabe. One rural teacher was threatened the day before voting; like many other voters, he was forced to pretend he was illiterate on voting day so that he could be "assisted" by the police and ruling-party representatives in the voting booth. People who did not vote had to fear retaliation and violence. 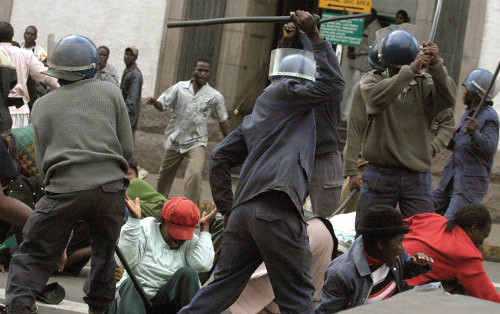 Supporters of Robert Mugabe's opposition party; Morgan Tsvangirai, were beaten and killed, his party headquarters blockaded, his support infrastructure destroyed. Tsvangirai argued that he cannot ask his supporters to vote in an election that would mean their deaths. You can find out more by reading Mr. Madenkiya's article. Please take a look at it, and remember Zimbabwe today. If you have time, say a prayer for the people of Zimbabwe, and let's hope that their situation changes. It's hard to know if there is a good charity organization for Zimbabwe, as much of the money given to the country is confiscated by President Mugabe and used for his own personal purposes. Global giving is a legitimate charity where you can direct your donation towards a specific cause (sending a girl to school, feeding starving children, buying seeds for local people to plant for food). Click Here to see more.

If you'd like to see more articles about African holidays, Click Here. You can also purchase a cane hand-crafted in Zimbabwe on the Africa Imports web site by Clicking Here. Each time one of these canes is purchased, it helps pay the artist who made the cane and also helps the art of Africa continue to thrive.