How much do you really know about Kwanzaa? Around the world, people know about Christmas. But there is another holiday in December – Kwanzaa. Although Christmas is a far bigger holiday, Kwanzaa becomes more popular each year.

Where Christmas is based on religion and is celebrated for 12 days, Kwanzaa is a 7 day celebration of African culture and history. But what is Kwanzaa and how is it different from Christmas?

The history of Kwanzaa

In the 1960s, following the Watts Rebellion, Maulana Karenga wanted to bring the African American community together in unity and in their fight against oppression. He created a holiday that he based on African harvest festivals - Kwanzaa. The name Kwanzaa comes from ‘matunda ya kwanza’, a Swahili phrase that means ‘first fruits’. 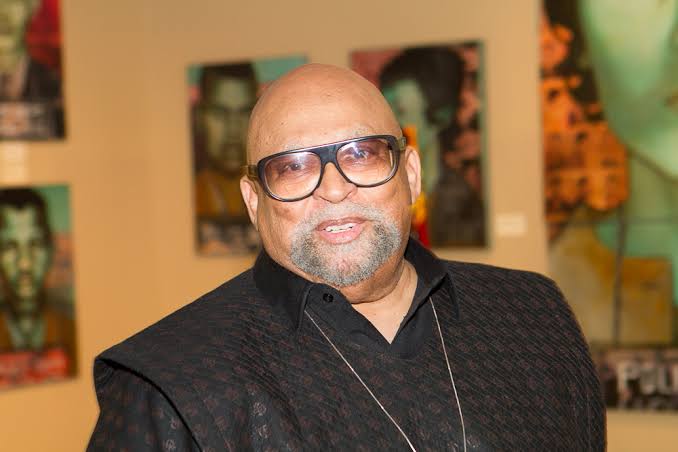 Maulana Karenga is the creator of Kwanzaa.

The first Kwanzaa celebration took place in 1966 and champions the spirit of Africans of all faiths. Whilst many believe it to be an alternative to the traditional Christmas, in fact, lots of Africans and others take part in both celebrations.

Kwanzaa is focused around seven principles:

In fact, the number seven runs through Kwanzaa in that there are seven symbols – crops, mat, candleholder, corn, unity cup, gifts and seven candles. Of the seven candles, three are in red and represent the struggle; three are in green and represent land and hope for the future; and the last one is black which represents people of African descent.

In a way, the red and green of Kwanzaa are the same as those of Christmas. Indeed, families that celebrate both festivities decorate their homes in these two colours. But when it comes to gifts, they are very different; and there are other differences, too. 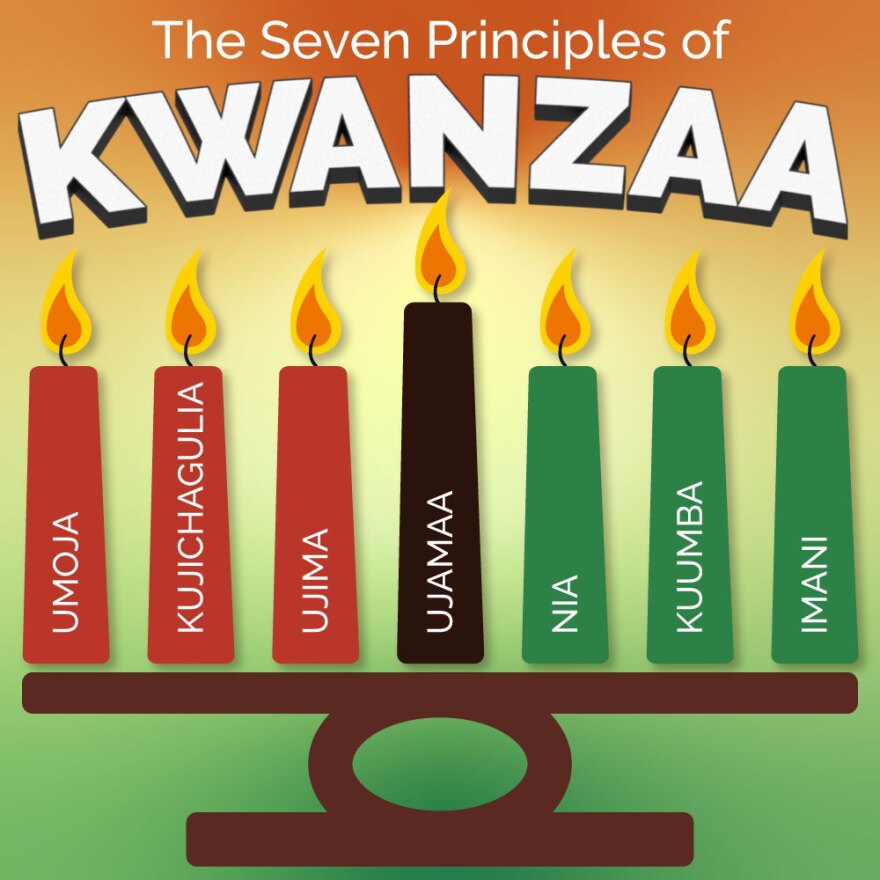 The meaning behind Christmas

When we think of Christmas, Santa Claus, tinsel, holly and ivy, Christmas trees, a big festive feast, going to Church and lots of presents come to mind. But at its heart, Christmas is about celebrating the birth of Jesus Christ, which is where the nativity scene originates and the tradition of people from all over the world bringing gifts for the newborn child.

Over the centuries, Christmas has evolved to include a wide variety of different traditions; such as the Yule log which is Scandinavian and the winter solstice in descent. In fact, Santa Claus, now associated with the bringer of presents, was originally a Dutch saint that helped the needy and the poor.

The meaning behind Kwanzaa

Kwanzaa is much more spiritual and cultural in its origins. It was created to encourage African Americans to remember their cultural heritage. It is far less about giving gifts and much more about celebrating the seven principles over the seven days of Kwanzaa – each day is dedicated to a principle and a candle is lit in the process. 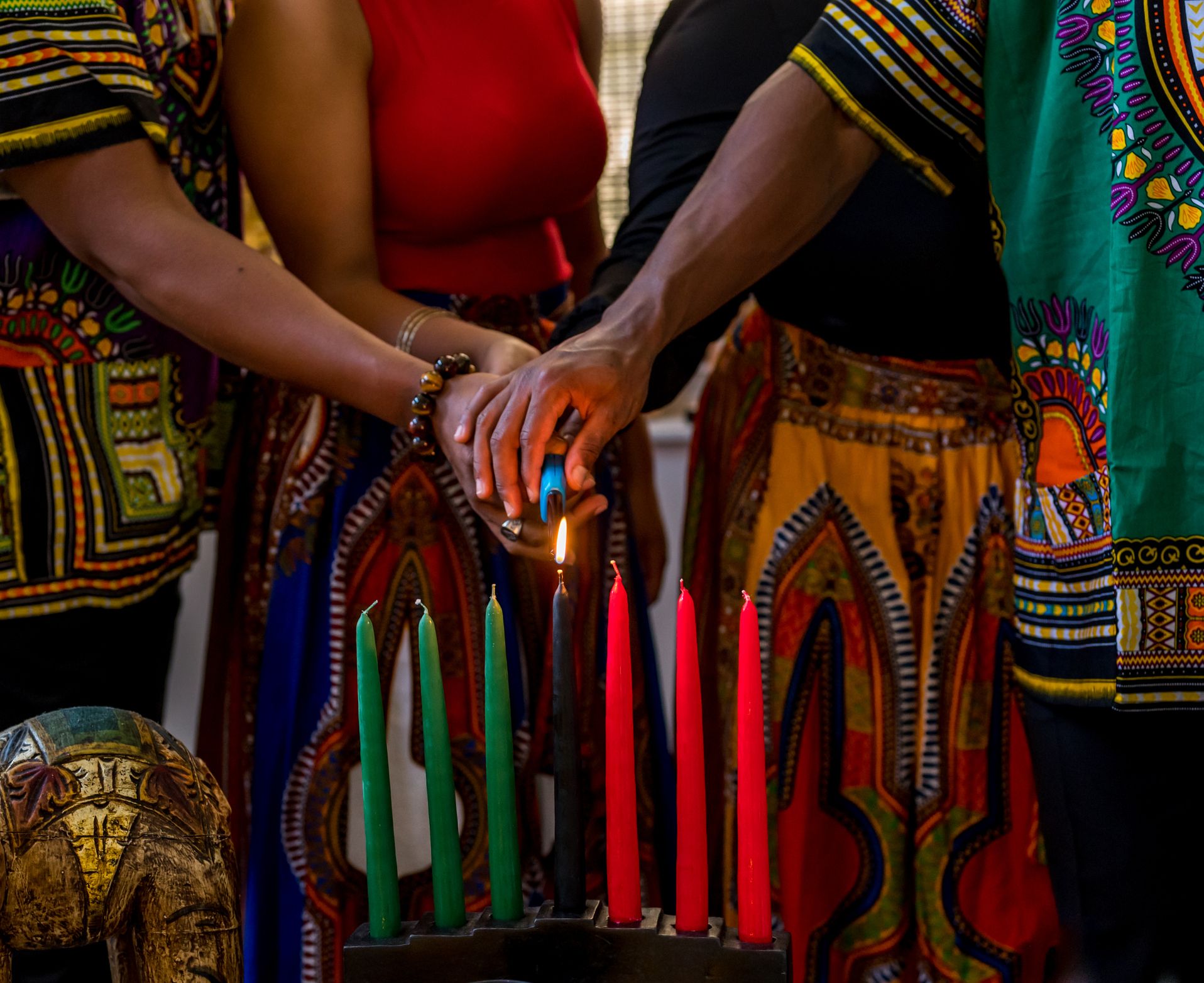 The kinara is a seven-branched candleholder used in Kwanzaa celebrations in the United States.

The differences between Christmas and Kwanzaa

Both holidays have the traditional feast (harvest) and bring together families, loved ones, friends and often neighbors. The festivities are based around sharing, unity, forgiveness, joy, happiness and fun. But there are differences, too.

Despite their differences, there are commonalities between the two holidays; both bring people together, both promote harmony, sharing, joy and happiness, both are celebrating community and unity. In a way, both are also representing their roots; albeit one is based in religion and the other is based in cultural heritage.