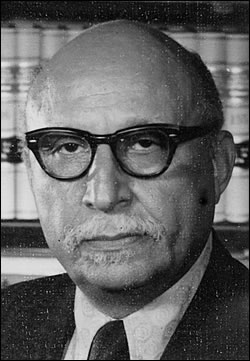 Oliver Hill was a civil rights lawyer who was key to ending “separate but equal” in America and a prestigious member of Omega Psi Phi Fraternity, Inc. The Presidential Medal of Freedom Award recipient worked to obtain landmark legal decisions involving equality in pay for black teachers, access to school buses, voting rights, jury selection and employment protection. Hill was a Richmond, Virginia native raised in Washington, D.C. Before joining the U.S. Army in 1943, he helped black teachers earn fair pay in the Alston v. School Board of Norfolk, Va. case in 1940. After returning from World War II, Hill went before the Virginia Supreme Court to win the right for equal transportation for school children. In 1951, he helped black students attending a broken down school in Farmville, Virginia obtaining a better learning facility by introducing the Davis vs. County School Board of Prince Edward County case. Because of his work in civil rights, Hill’s family was constantly under attack by racists. His children were not allowed to answer the phone after numerous death threats. And one night, they were awakened to a burning cross on the front lawn. Hill's work earned him the 1959 Lawyer of the Year Award from the National Bar Association, the Equal Justice Award from the NAACP and the Justice Thurgood Marshall Award from the American Bar Association. Hill continued to receive many national honors, including the National Bar Association Hero of the Law award. Hill died on Aug. 5, 2007 at age 100. In tribute to his legacy, a bronze bust of Hill stands at the Black History Museum and Cultural Center of Virginia in Richmond.