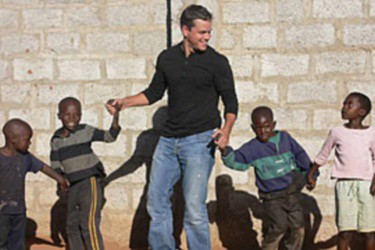 There is almost always a spotlight on celebrities and their personal lives. You can't open up the internet or check out your groceries without seeing the latest headlines. The good news is that some celebrities are using their fame to bring attention to crises throughout the world, sometimes far away and sometimes in our home country. We wanted to focus on people making a change in Africa, and today it's Matt Damon. As one of the founders of Not On Our Watch, he helps bring awareness to protect the vulnerable and displaced worldwide by providing assistance to ravaged areas such as Darfur and Burma. The cause closest to his heart is his own H20 Africa Foundation, which he co-founded. H2O Africa is creating widespread public awareness of the water crisis in Africa and gathering support for clean water programs in critical areas, including communities along the Running the Sahara route. It all began when Damon heard about three men who wanted to be the first to run coast to coast across the Sahara desert - a 4000-mile journey - to raise awareness about the water problems their country was facing. Their expedition became the subject of his documentary film, Running The Sahara. At the same time the H2O Africa Foundation was created to help the film crew leave a lasting legacy on the people living along the route where the documentary was filmed. As executive producer and narrator, Damon hopes it will make the needs of Africa more significant to the rest of the world. H20 Africa Foundation helps support Global Youth Initiative for Clean Water, Route Nations, Millennium Village, and Central African Republic Well Project. All these causes aim to improve water resources, creating wells, or improving health and sanitation. To find out more about H20 Africa Foundation just Click Here. To see more free articles just go to the Africa Imports web site or Click Here.