Freedom day in South Africa's celebrates the first non-racial democratic elections of 1994. Peace and unity are intended to mark this celebration. Everyone celebrates the improvements and how far the country has come in a long and troublesome history that is now looking up. The road to democracy and freedom hasn't been easy for South Africa. White men arrived at the Cape in 1652 and started controlling and dominating the country. Eventually all peoples of colour were denied to vote and so were refused to have a say in the running of the country. The exclusion of the majority of South Africans from political power was at the center of the liberation struggle and resistance to white minority rule. Not only this, but black Africans were systematically herded into restricted areas and homelands and their rights to equal opportunity denied. A non-racial constitution was eventually agreed upon and adopted in 1993. The new Constitution came into effect on 27 April 1994, the day the nation cast its vote in the first democratic election in the country. The ANC was voted into power and Nelson Mandela was inaugurated as the President of South Africa on 10 May. 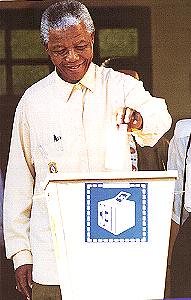 "As we celebrate our freedom, we recall the heroism, the sacrifices and the solidarity that ensured that South Africa should have the possibility to build a just and prosperous country," High Commissioner Radebe says. To find more free articles about African Holidays just Click Here.